Wisdom in the Piles

I have been working to clear my desk of some untended filing and unsorted scraps and have been rather struck by the wisdom in the piles. I have to wonder... is there something to the word mess occupying a large part of the word message?

So, some of the wisdom I am receiving from the messages on my desk include: 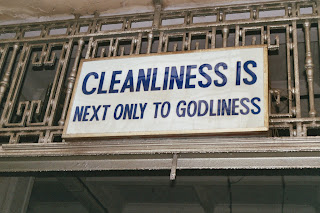 And then, as the little piles find their way into files or the shredder, I get a flash on my computer screen from the screen saver slide show with my favorite photo taken in the old train station in central Mumbai, India... and I am calm.

What's the mess in your message telling you?

Enjoy the week!
Posted by Gary Groth at 1:44 PM

A Nod to Tony

I am curious...if you had 30 seconds on a world stage to offer thanks, to acknowledge support received, to make a political statement, to"audition" for your next gig, to smile for the masses...what would you say and to whom? What would this moment be for you?

As she accepted her 5th career Tony honor last night, Actress Angela Lansbury said she would "talk about how she feels" and not read off a list of every name of every person she met. She must have zillions of people to thank. And what we got was a moment of honesty, humility, and essence. We heard about privilege and gratitude, honor and joy rather than names of management and lawyers and stage hands. How refreshing.

And sometimes "thank you" is just enough!
Posted by Gary Groth at 8:04 AM

In my coaching practice there is a common theme that emerges about being on an edge. The edge is a place that is really uncomfortable, possibly dangerous. A risk and a change is wanting to happen.

A leap of faith. Go over the edge and emerge changed. Step into the void and trust you have the skills and resources to succeed. Stay, holding on with bleeding knuckles, exhausted. The edge is a vantage point, a place to look out from, a place of choice--"will I leap or will I stay?"

It is at this edge when we consider our options and then begin to negotiate and bargain and deal. It can be a place where imaginations run wild and a place where a slow emotional and physical death can occur. The edge is a place where the barrier between action and inaction comes front and center.

"I can go over the edge if..." "I will jump when..." "Wow, look at all the possibilities from up here..." "Gosh, I can see forever from here..." "Don't come near me up here..." This edge place in our lives and in our days can be filled with great anticipation and change, utter fear, chaos, and paralysis, celebration and faith.

Think about your edge(s). What is it today? What does your edge look like (a cliff? the top of the Empire State Building observation deck? On a bungee jump platform?)? When you are on this edge, what do you see possible out there? What's keeping you on the edge, keeping you from leaping? What is it about being on this edge that propels you into action? What is the difference between what you have on the edge and what could be over the edge?

Consider going over the edge--will it be an elegant dive or do you need to be shoved, a gentle tip toe over or holding the hand of someone who joins you?

Two movie images come to mind that describe the edge I feel I am on today: One is from the movie "Butch Cassidy & the Sundance Kid" when Butch and Sundance (played by actors Paul Newman and Robert Redford) were standing literally on the edge of a very tall cliff with a gang of gun toting cowboys at the top of the cliff and a raging river at the bottom of the cliff. After some banter on the cliff while bullets rained down upon them, they decide to leap all the while yelling "Whooooooooaaaaaa shiiiiiiiittttt!!!!" until they hit the water below. Kind of where I am at the moment...on the edge, bullets above and a raging river below, partner beside me, time to leap. And the other feels a bit like "Thelma & Louise" when actors Susan Sarandon and Geena Davis decided to drive their cool car off the edge of the Grand Canyon--to a certain death--

because this was a better choice from that vantage point than facing the legions of law enforcement trailing them. Either way, two great movies, four great actors, and two incredible edges to consider. The images make me smile.

Go forward, to the edge, and leap. Whoooooooaaaaa Shiiiiiittttt!
Posted by Gary Groth at 8:18 AM

I am solidly of the mind that employees do the job the way they get the job. I am also of the mind that employers manage/evaluate/retain employees the way they hire employees. There is a correlation between energies, resources, tactics, and values in the job seeking and job offering process...a correlation many do not understand, accept, honor, believe. Do we reap what we sow?

Consider: A candidate for a fundraising job who does not cultivate a relationship with those hiring is likely not to be a good cultivator of donors on the job. A candidate for a job who dominates the interview will likely dominate important conversations with colleagues or customers. An organization or company that frequently reschedules appointments with candidates probably does not hold time and appointments as sacred and essential. An organization that rigidly haggles over compensation and benefits (i.e. being really inflexible and non-negotiable) will likely be an organization where employees will not have the resources they need to do the job effectively and still be held accountable for reaching the goals. A candidate who is hired quickly simply to occupy a role will always be viewed as a person simply occupying a role and not essential to any goal achievement.

The employment process is not only about what you (candidate and organization) will do for one another. It is also about how you want to be with one another. The search must go beyond the exchange of service for compensation and benefits. It must focus on relationship...right relationship between the employee, colleagues, customers, donors, advertisers, volunteers, vendors. It's a very big "and"... can the candidate do the job and...? Can the employer offer a job and...?

How are you showing up?
Posted by Gary Groth at 7:56 AM