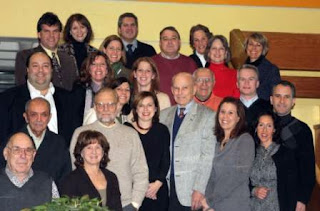 Board of Directors, JCC of the North Shore, February 9, 2011
About one year ago, it was reported in my community that the 100 year old Jewish Community Center was going out of business. Membership--the life-blood of the organization--was plummeting, philanthropy was down, the economy was killing the organization, the facility was in growing disrepair and lacked modernity, and a new YMCA in the town was competing fiercely. The organization's programs, leadership, and mission were completely out of alignment. No one was talking about it openly, but there is also a Jewish communal "cannibalism" taking place where organizations are directly (or indirectly) seeking to damage one another to advance their own agendas. All in all, this was a pretty typical scenario for JCC's in many communities across the country (and frankly, quite common in other religious and other service areas). Open on Monday, out of business by Shabbat!

I have been very critical of the JCC and its management. I have written about it on this blog several times before. This JCC has been an incredibly good example of how not to do things on many levels. It would be easy to be a sideline critic--this JCC has had many of those--but I became increasingly more frustrated because I had been trying to volunteer my professional fundraising skills and coaching service to help the JCC for a couple years and had been rebuffed. Really! Mine was one of hundreds of stories just like it. Architects and managers of a failure run for cover, triggered by the enormity of their problems and overwhelmed by the options to reverse the failure. In this case, closure is easy!

I wasn't present, but I have heard several versions of the story of the board meeting the night the decision was being made to close the J. The rancor and upset, the accusations and the finger-pointing. My favorite: "It took 100 years to destroy the institution beloved by so many!" What a waste! And what emerged from that fatal night was a completely different scenario: Some courageous (some have said crazy) volunteers said they would reinvent the JCC for its next 100 years, raise the funds, make the tough operating decisions, hire, fire, risk, defy, and imagine. In no way, under the watch of this group of focused volunteers was the J going to close. There were people in the community, many who were part of the problem leading to the near-closure, who said "Show Me!" These volunteers stood before the powerful voices shouting for closure and and accepted the philanthropic challenge of a generation!

Challenge accepted, success in the works!

The story has not been fully written just yet...how it happened that a small community and a group of volunteers saved their JCC from closure. But many new chapters have been written. I can highlight a few things, though:
The JCC board approved a sweeping reinvention plan last week. It is bold. It is not without risk. It is exciting. It is a bright hope for a brighter future. And it has reminded me of why I do this work. Our work in philanthropy is about changing people's lives and making our world and communities better. It can be a job, but it also has to be a mission in life...a purpose driven life. We can never be okay with charitable organizations going out of business; the impact on the people who rely upon them is too great. The hole left in the heart of a community is gaping.

Most non-profits are an un-renewed grant award or a struggling annual campaign away from closure. Before the real crisis hits you, what can be done today--with your leadership and your programs--to stay ahead of the crisis? The people who rely upon your existence are counting on you to know. Today!

P.S. I finally became actively involved. That moment happened about six months ago when I was invited to join the volunteers who were saving the J, as a member of the leadership task force and then as a member of the board of directors. Talk about putting my skills and my ideas and my expertise where my mouth is. Get off of the sidelines. Jump! Higher. Now. What an amazing volunteer experience I am having. I'll keep you posted on our progress.
Posted by Gary Groth at 8:40 AM