From the Bureau of Labor Statistics: 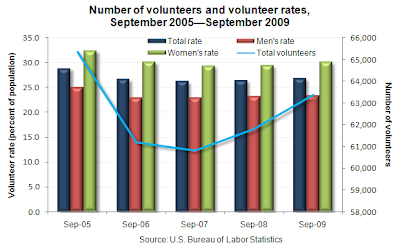 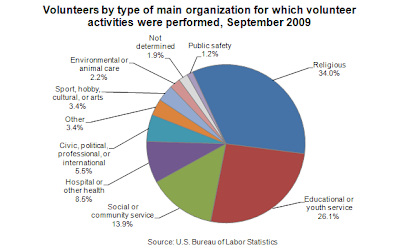 Some highlights from the full report include:
Volunteers are a special breed of person. And organizations that know this to their core, enjoy greater impact and sustainability. Volunteer management (and donor relations) is not always easy, but it is primary to our work in non-profit organizations. I believe strongly (and it is my experience) that we manage and use our volunteers consistent with what we believe about volunteerism. Think about this. There is a qualitative difference between volunteers who are treated as "free labor" and those who are enrolled by organizations to be citizen partners in the organization's mission. What do you think?

Go volunteer today...or hug one in your midst!
Posted by Gary Groth at 9:00 AM